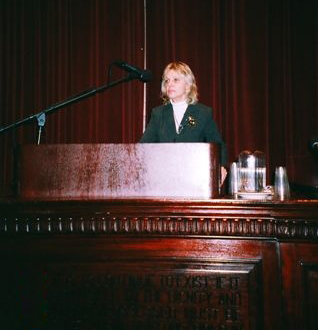 I was walking across the street and was hit by a delivery van. My head hit the curb. I had no bleeding, but bystanders called an ambulance and insisted I go to the hospital. Iwent to the hospital, was given an X-Ray, and CT Scan, and was released with pain killers. The next day I was dizzy, and seemed to have memory confusion. Also had pain down my right arm.

After two years my first attorney eventually brought me an offer of settlement for about $30,000. I was shocked because I was still in pain, couldn't work. What was worse, I had memory loss, had double vision, and found ordinary sounds ear-splitting.

Attorney Vale was recommended to me. Over the phone, she asked me to bring a copy of any legal documents I had. At our meeting she reviewed a deposition I had given, and some other papers. She asked me questions about how I felt. Then she told me that I had a much more serious case than the previous attorney realized. She explained that X-Rays, and CT Scans do not tell the story of soft tissue injury, and of brain injury. She took my case on contingency. Then she sent me to some doctors, who gave me special tests. They confirmed that I had mild-moderate brain injury. Attorney Vale then went to Court, and created a new time-table for information gathering. She warned me that because she was expanding my claim to include brain injury, the case could probably take another two years. I understood.

She performed hours and hours of new legal work in order to expand my case. I want everyone to know that attorney Vale laid out over $80,000 of her law firm money to prove my injuries. She took all the risk. But as she told me, when she believes in a case, she will do whatever it takes to prove it!.

The trial took 3-4 weeks. We produced 8 expert witnesses, including a radiologist, a neuro-psychologist, a neurologist, a clinical psychologist, a urologist, and neuro-optomotrist. The jury awarded me several million dollars for my loss of wages, for my medical needs, and for my pain and suffering. But more importantly, attorney Vale gave me my self-respect back. What others were calling "malingering" (attorneys use that word to mean "faking" illness to get money) attorney Vale showed my complaints were real and permanent. Brain injury is often called the invisible injury. Attorney Vale made it visible to the jury. I am eternally grateful to attorney Vale.

I was a nurse's assistant at a large public hospital in New York City. A new administrator became abusive to me. At first he teased me, then he made advances. His advances became more notorious as time wore on. I complained to the administration, but no one paid attention. Eventually I was fired, because I blew up at him in front of other employees. Of course, the records read differently. I was recommended to attorney Vale. She painstakingly encouraged witnesses to make statements. One of the biggest problems is to be able to get folks to testify against their boss. Eventually she prevailed. The case went to trial. I was awarded several million in damages. Even more satisfying to me, was that jury awarded me over $19,000,000.00 in punitivie damages against the hospital. I have my self-respect back, and am now working once again. I am happy to report this story on the website, and express my gratitude publicly.